Sathyabama marine biologists are surprised to see the landing of a rare species ‘fine spotted whipray’ that got entangled in the fishing neton Monday (15 July 2019) (Photo). Two individuals that has a total length 2.45 and 1.97 meters were caught as a part of trawl net operation off the coast of Gulf of Mannar with a depth ranging from 40-50 m. Upon inquiry with fishermen they said it may weigh between 50-70 kgs and can fetch few to several thousands of rupees.

“The ray species closely resemble the newly described species Himanturatutul (Borsa et al., 2013) based on the spots on the dorsal side. However, detailed examination of other morphological characters and molecular techniques will provide much insights to confirm the identify” according to Dr. Prakash, Scientist, Sathyabama Marine Research Station, Rameswaram. “The fine spotted whipray has wide distribution such as Tanzania, Western Indian Ocean; Laccadive Sea; Indo-Malay Archipelago, Bali sea, South China sea and the Sulu sea” he added.

Though the sharks and rays have been included in the Schedule I of Wildlife Protection Act 1972, information on certain species’ ecology, biology and population status needs to be validated in Indian waters to establish species specific management plans” said Dr. Amit Kumar, Scientist, Sathyabama Marine Research Station, Rameswaram. He said that the fishermen remove the stinging spine (insert photo black circle) from the tail immediately after catch to have easy handling of rays onboard.

The scientists of Sathyabama Marine Research Station seek the help of fishery scientist Dr. S. S. Mishra, Zoological Survey of India, Kolkata for species identification. Its conservation status has not yet evaluated and not covered by Wildlife Protection (1972) Act of India. However, like other stingrays, they give birth to few young ones and have a long gestation period. Hence, they are unlikely to get recruited to sustain fishery exploitation. 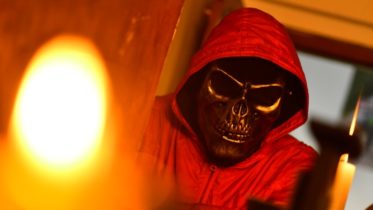