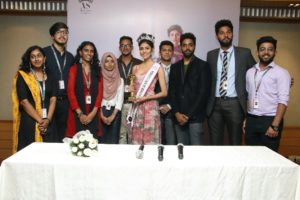 Apurvi Saini from Chennai, bagged the title and crown of ‘Rubaru Face of Beauty International India 2019’ in the national grand finale of ‘Rubaru Miss India Elite 2019’ which was held in Delhi on 17th March 2019. 20 girls from all over India had competed in this pageant. Apurvi is currently pursuing her B.Tech in computer science engineering from Srm University. She is 21 years old and she started her career in modelling in Chennai at the age of 19. Before this, she had been to many pageants and bagged the titles of ‘Reliance Jewels Miss India Chennai’, ‘times of India fresh face Social Star’. She had gone for south zonals of Rubaru Miss South India and was crowned as the first runner up as well.Apart from pageants, she has done many TVC’s , shoots and has walked the ramp for brands like FBB,Satya Paul, Reliance Trends and many others.She is interested in acting, singing,dancing and she is also an avid writer.

She would be representing India internationally in Philippines at the ‘Face of Beauty ‘ pageant which would be happening this year end.

Through her Rubaru miss India elite achievement, she would like to encourage young girls in Chennai to follow their passion and always dream big for themselves. She would like to start modelling workshops where she wants to teach aspiring girls about modelling and create awareness about the same. And she hopes that through these efforts she sees many girls from Chennai going for pageants and making their nation proud.

Her views on representing her country internationally, ” With this title I would like to make my country, my parents and myself proud and my only aim now is to dream bigger every day and win people’s heart. ”

Her further plans would include seeing herself on the big screen with her favourite Television personalities.