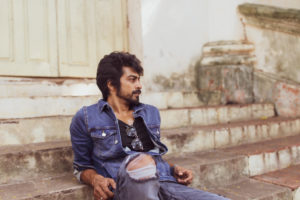 The talented youngster, who was first a banker before turning a Radio Jockey and then finally entering the world of films, has already acted in two films even before the release of his first film.

Yes, while director Lokesh Kanagaraj’s Kaithi, which is to hit screens this Deepavali, will mark Arjun Das’s debut in cinema, he has already acted in Prabu Solomon’s Kumki 2 and has played the lead in a film titled Andhaghaaram.

Arjun, who hails from a non-filmy background, had to make quite an effort to enter the film industry. Arjun, however, says he enjoyed the challenge.

“I didn’t know how the industry worked. So, meeting people and giving auditions made my experience richer. In fact, I enjoyed the process and have nothing to complain about,” he informs.

So great was Arjun’s love for cinema that he chose to quit a well paying banker’s job in Dubai to enter the world of films.

Says the youngster, “I have always been passionate about cinema and therefore wanted to switch careers. Convincing my parents to agree to this decision of mine wasn’t easy. They finally gave in and asked me to move to Chennai to pursue my dreams.”

Once in Chennai, the dedicated youngster chose to do short-term courses in Koothu-p-pattarai and Evam. After that, he did a portfolio shoot and began looking for acting opportunities.

But until the time he found an opportunity, Arjun realized he would have to sustain himself. So, he began working in a radio station as an RJ.

“Thanks to my stint as an RJ, I got to meet a lot of people from the film industry. It was during this time that I got a call for director Lokesh Kanagaraj’s film. I auditioned for it and got through.”

His sincere and dedicated efforts had finally borne fruit after four long years!

Soon, more opportunities began coming his way and before he knew it, the actor found himself working with director Prabu Solomon in Kumki 2.

Says the actor, “I am excited about the way forward. I want to make the right choices and work with good directors,” he signs off.