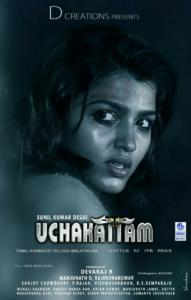 Sunil Kumar Desai is famous in Sandalwood for his kind of suspense action thrillers and with this film through a dubbed version he forays into Kollywood.

The trailer showcased some tense moments of the film and led the viewers to believe that the movie would be a taut suspense thriller that SKD is known for. Sadly the movie turns out to be one long drawn yawn of a climax for more than two hours right from the first scene. There is a constant duel between the ongoing on the screen and the head of the viewer. The movie suffers from too much action, so much that it is like watching WWE on the big screen without any break. There is more action than the suspense and that affects the film badly despite having an interesting “Kill”.

What can be said about the actors? The men are asked to showcase their “beef” while the women their “skin” and they do a good job of it. Thakur Anoop Singh scrapes through while Sai Dhansika is fine in her role. Kishor has little to do in a short role while others manage to fill their screen with their physique.

Vishnuvardhan;s cinematography is effective while Bollywood’s Sanjoy Chowdhury’s thumping background score can assault the ears. Editing is average and dialogues decent. Direction by SKD despite being a veteran is unimpressive.

UCCHAKATTAM is feeble thriller that is strictly for the “gym boys” !!