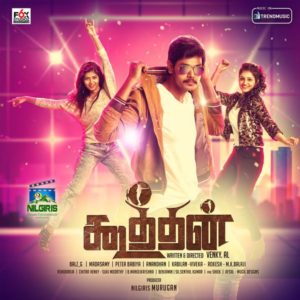 Koothan is the story of an aspiring young dancer, Rajkumar (Raana) who dreams to make it big in his life. He has a group of friends who are also his group dancers, they have been earning money by doing small time shows. He bumps into Srilakshmi (Srijita Ghosh) at a dance competition but she participates only to seek revenge and to settle her personal issues with Krishna (Nagendra prasad) which she fails to at that time.

Eventually, Rajkumar and Srilakshmi start getting closer after meeting a couple of times and romance sparks between them.

Srilakshmi’s sister recognises that he has great natural rhythm in dancing hence she insists him to learn Bharatnatyam and becomes his dance teacher.

Problems arise when the producer decides to sell his house in the film city which has been a home for a lot of people and they were emotional attached to the place. So the producer asks them for a huge amount of money for him not to sell the place. Rajkumar and his friends enrol in an international dance competition to win that cash prize and save their homes.

They face few struggles and betrayals but eventually try to find their way to the end.

Srilakshmi finally opens up about her hatred towards Krishna. Will the dance team make it to the top at the end is the only question of the plot.

There’s nothing new to the storyline and the sequences are almost and always predictable. The actors did okay in the movie but there was unnecessary humour included in a number of scenes. The music director didn’t do a great job and the songs turned out to be disappointing as well. Overall, Koothan is repetition gone wrong.