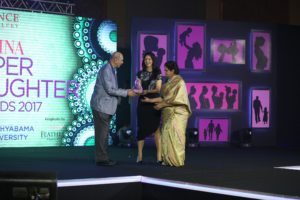 It was an emotionally-charged evening at the Femina Super Daughter Awards 2017, presented by Prince Jewellery, powered by Sathyabhama University, in Chennai, where several women achievers stepped forward to thank their parents for giving them wings.

Femina, India’s leading women’s magazine brand, presented the second edition of the Femina Super Daughter Awards 2017, presented by Prince Jewellery, powered by Sathyabhama University, to recognize and honour prominent parent-daughter duos from various fields—films, sports, theatre, performing arts, business and so on. The awards is a platform for daughters to acknowledge their parents achievements and the unique bond they share. Some unstoppable parent-daughter duos that were felicitated last night included:

Speaking on the occasion Tanya Chaitanya, Chief Community Officer and Editor, Femina said, “The bond that parents share with their child is so unique. Daughters, in particular, are delicate and feisty all at once. As a mom, I feel great pride to be a part of the Femina Super Daughter Awards 2017, which celebrates this beautiful bond, in a country, which has traditionally not exactly celebrated the girl child.”
An emotional Rajni Bhatia, mother of actor Tamannah Bhatia, said, “Tamannah was always a talented child, and at the age of 14, when an opportunity came by, she asked me if she could pursue acting. My first reaction was ‘No.’ Then I remembered, that it was always my dream to be news anchor, and my mom didn’t encourage me to pursue it. And so, it has always been a regret of mine. I couldn’t let my daughter live with such a regret, and so I told her to grab the opportunity.”

Well known VJ and RJ Bhavana Balakrishnan, who was the host for the evening, kept the audience thoroughly entertained with her banter. The energy intensified as the evening progressed, with a fashion show by designer Rehana Basheer, who walked the ramp with her mother at the end, in a touching finale. It was followed by a rib-tickling comic act by stand-up comic Alexander.

About Femina
FEMINA was first published in July 1959 and for over 56 years now, Femina, India’s first and largest read women’s English magazine has long been the definitive life and lifestyle guide for progressive woman. It is owned by Worldwide Media, a wholly owned subsidiary of the Times Group.  Femina, published fortnightly, features articles on women achievers, relationships, beauty and fashion, travel, cuisine and health and fitness. In recent years, it has extended its reach by launching its language editions – Femina Hindi, Femina Tamil and Femina Bangla. It also publishes Femina Salon and Spa, a magazine targeted at beauty professionals across the country