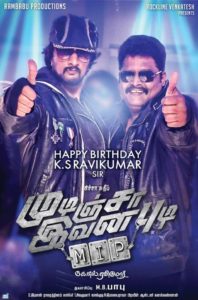 The film faithfully sticks to the formula of KSR. To be more precise, it heavily reminds us of ‘Villain’, an Ajith starrer movie directed by the same Ravikumar.

Having said that, we should also say despite its familiarity, ‘Mudinja Ivanai Pudi’ scores enough brownie points, as the movie is racy and keeps the audience on the edge of their seats in most parts.

Here is the story part: Sathyam (Sudeep) is a real estate agent. But he has a darker side, as he is a robber of large scale thefts.

However, he succesfully manages to convince the police and others that those crimes are the handiwork of his look-alike ruffian twin Shiva.

But things are no more the same after two businessmen (Mukesh Towari and Sharath Lohitashwa) enter the scene. Also, a police officer Kishore (Sai Ravi) is behind Sathyam. In the meantime, the ‘hero’ also has a love episode with Subhashini (Nithya Menen).

It’s a solid performance by Sudeep and the actor may grow big in Kollywood too, provided he chooses the right scripts. Nithya Menen shows her acting prowess again, while Prakash Raj and others in the cast are adequate.

Rajarathinam’s lens speaks familiar language, while D Imman’s music, though good, hampers the pace of the movie. Editing could have been better.

‘Mudinja Ivanai Pudi’ has nothing new to offer. But it has enough moments to entertain you. In short, it is like tasting your favourite food, despite it being too familiar too you.