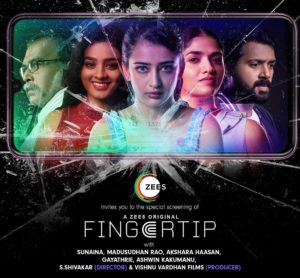 Fingertip portrays how a single swipe or post on social media, can change the lives of its users & push people out of their comfort zones, thereby burdening them with huge social pressure. Each episode features a fictionalmobile app having relatable features to apps in the real worldand showcases various negative human emotions such as greed, rage among others.

Akshara Haasan, said, “I’m glad to be associating with ZEE5, who has been producing such great original Tamil content for a while now. In today’s age, where social media is a very essential part of our daily life, there is a growing need to create awareness to the ill effects of social media as well. I hope the audience enjoysmy characteras much as I did.”

Director, Shivakar said, “There is growing appetite for original and fresh content in the Tamil space and I’m happy to be collaborating with the pioneers in this regard, ZEE5. Fingertip will be a gripping and fast paced thriller that will keep the audiencesintrigued and entertained throughout.”

Aparna Acharekar, Programming Head, ZEE5 India said, “All of us use social media to connect at some point of our day and it has its countless advantages. However, given its reach & scale, it has many downsides as well. Fingertipis one such story which needs to be told and its gripping story line is sure to get our viewers hooked. We have received phenomenal responses for our previous Tamil Originals and we hope to further strengthen our regional offerings with this series.”