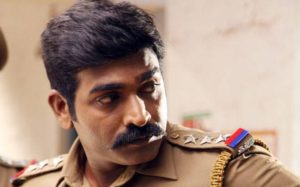 Looks like Vijay Sethupathi is the busiest hero in Kollywood. The actor, who already had three releases this year- ‘Sethupathi’, ‘Kadhalum Kadanthu Pogum’ and ‘Iraivi’- is now shooting for a bunch of projects.

They are: ‘Dharma Durai’ directed by Seenu Ramasamy, K V Anand’s next film which is untitled yet, ‘Aandavan Kattalai’ helmed by ‘Kaaka Muttai’ fame Manikandan, ‘Rekka’ by Rathna Siva and Vignesh Sivan’s next ‘Kaathuvakula Rendu Kaadhal’.

These apart, two of his films are waiting to hit the screens- ‘Idam Porul Eval’ and ‘Mellisai’. Sources close to the actor said that he is being stormed by offers though he is choosy before signing on the dotted line.

“At the same time, he could not say no to some filmmakers as they are very close to him,” they added. There was a buzz that Vijay Sethupathi would be the villain in Ajith’s 57th film, but the claim has not yet been confirmed so far.