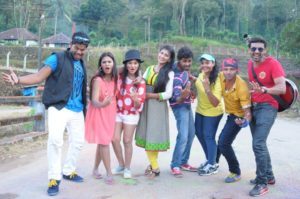 It’s been proved over the years in Tamil cinema that movies comprising of newcomers have had its toast of success. Now comes the latest one to join the bandwagon – Santhoshathil Kalavaram, which is directed by Kranthi Prasad. He is quite famous for exhibiting his directorial skills in ad commercials and short films, winning critical acclaims and awards as well. Having pursued education in film school, he has been associated with some of the top league filmmakers of Telugu film industry. But what offered him more experience was watching plethora of movies. He has nurtured his understanding about Tamil cinema by watching more movies of this region. He has now embarked on his journey out here in the Kollywood with a strong faith that ‘Talents are appreciated more than looks”.

“What happens when a riot breaks out during a joyful occasion? What could be the outcomes of such events? This forms the basic premise of Santhoshathil Kalavaram. This is the reason behind tagging the title as ‘The Modhal (Clash) between Good and Evil’. Although, the film is a thriller, it encompasses friendship, love, affection, comedy and spirituality as well.” “fight between nagative and positive” santhoshathil kalavaram.tagline

“You know yourself; you’ll discover the God within. You’ll know your heights and the film talks about this blatantly.”

The shooting of this film has been already completed and post-production works are happening on full swing now.coming soon audio launch.