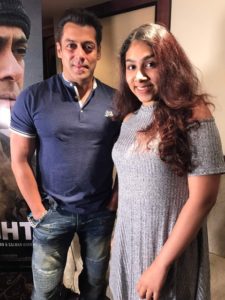 It’s rare to have India’s most eligible bachelor talk about love and heartbreak in the same breath. Bollywood superstar, Salman Khan, in his interview with youtuber Hanee Chavan recalled the time he was first smitten by a girl, who was just not into him. Watch the full video here: https://www.youtube.com/watch?v=ELPQPxgKcXw

Salman Khan spoke about how he could never muster the courage to tell the girl how much he liked her because he was scared that she would say no. In the end, she ended up dating his friends and he was heartbroken by that at the age of 16. But later he goes on to say how he today thanks God that glad it dint work out.

Salman Khan candidly also tells about how he got his first break in an advertisement not for his looks, but for his swimming style thanks to Aarti Surendranath who he first tried to impress by swimming underwater.

Salman reveals how he used to go door to door to everyone with his script as he initially wanted to become a director but everyone would reject his script and ask him to become an actor instead and that is what pushed him to get into movies.

Salman Khan also admits to going to Sooraj Barjatiya before Maine Pyaar Kiya and saying he’s such really bad actor, why does he want him in the movie. According to Salman he acted really badly in the movie “Biwi ho to Aisi,” but Sooraj had full faith in him and went ahead with the movie which ended up being a super hit!

Salman Khan addresses the teenagers of the today in the end saying that they shouldn’t feel bad if they get rejected in love but instead failures in relationships during teenage years are the best thing to happen to them.

They say age is just a number and Hanee Chavan the latest addition to the Youtube sensation bandwagon, proves it just right! The 17-year-old has managed to bring celebrities like Ranveer Singh, Sonam Kapoor, Sunny Leone, Malaika Arora among others for her channel.

This young girl has managed to shake the internet by generating over 50,000 ++ views per video. Her vision is to put forward the teen perspective and the show has celebrities talk about everything from body shaming /skin problems/college fights.
Link to her channel: http://bit.ly/2gEUtPR