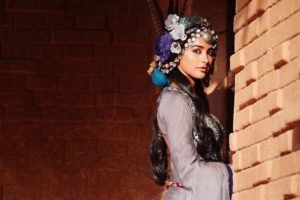 Pooja Hegde, who made her debut in Tamil with Mysskin’s ‘Mugamoodi’ opposite Jiiva, is now gearing up to make her big Bollywood debut opposite Hrithik Roshan in ‘Mohenjo Daro’.

She is already talk of the B-town for her surreal look in the movie and especially in the new song, Tu Hai, sung and composed by Oscar winning music director A R Rahman.

Accordingly to audience on social media platform, she looks breathtaking in the song opposite the hunky actor. She also matches the dance steps to perfection with Hrithik.

Talking about Pooja, director Ashutosh Govariker says, “During scripting I had envisioned a new face for the character of Chaani because I wanted someone without an image or perception attached to her. It had to be someone who would be seen more as Chaani, THE CHOSEN ONE; someone who depicted grace, dignity and strength but yet had a girl like naive innocence.”

“It was actually Sunita who first noticed Pooja in a TVC. She immediately felt that Pooja had a certain screen presence, which once i saw the commercial, even I felt. There was something about her that immediately connected with you as a viewer and that is what we needed for Chaani in Mohenjo Daro. We immediately called her and auditioned her. She was extremely quick on the uptake, took direction very well and was completely aligned with the character that I had in my mind. And that was it- I had found the Chosen One!!”