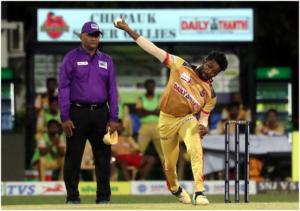 Soon after the 2019 player draft of the Sankar Cement Tamil Nadu Twenty20 Premier League, owner of Chepauk Super Gillies, Sivanthi Adityan Balasubramanian had talked excitedly about a pacer they had bought, who had a Lasith Malinga-like bowling action. “G Periyasamy. He had caught our attention during the trials we had conducted for the TNPL,” he said about CSG’s first pick at the draft.

A month later, everybody was talking about Ganesan Periyasamy, the ‘Slinger from Salem’ who walked away with the TNPL Player of the Final and Player of the Tournament awards on a pleasant August 15th night at the MA Chidambaram Stadium, Chennai. That night, when he was hoisted by his team-mates, also marked a new beginning for the 25-year-old, who had almost given up the sport due to his personal problems.

Right from the time he picked up a wicket, of Dindigul Dragons’ left-handed opener C Hari Nishaanth with his third ball of TNPL, Periyasamy gained in confidence with every match. No other bowler displayed the consistency of Periyasamy, playing his first big Twenty20 tournament, as he picked at least a wicket in all the nine matches he played.

He reserved his best for the last, destroying Dindigul Dragons with a five-wicket haul (4-1-15-5) in the final. He picked a record haul of 21 wickets, no other bowler had claimed so many scalps in the previous three years of the league.

Much before TNPL, Periyasamy led a difficult life in his village, Chinnappampatti, situated 33 kilometers west of Salem. Belonging to a poor family, that included four siblings, two brothers and two sisters, Periyasamy’s problems began when a bout of small pox partially blinded his right eye. Since then it was his affected eye that caught everybody’s attention. It hurt young Periyasamy so much he went into a shell, had very few friends and even dropped out of school. But even during those troubled times, he found succour in playing tennis ball cricket and bowling.

“They talked about my eye and I stopped getting along with people. I dropped out of school because of that. I studied only till 7th grade. I reared cattle and played tennis ball cricket,” he said recalling his childhood days.

“Tennis ball cricket gave me a different feeling. That gave me an identity. That’s why I never let go of playing cricket,” he added.

It was his passion for the game that led him to take part in the Under-19 state selection trials. He got selected and did play matches at the district-level for three years. But a bout of typhoid knocked him down and it was a phase when he almost gave up the game. He began working at a saree weaving company to help his family.

Every dark cloud has a silver lining, Periyasamy’s dark phase also developed a silver streak in the form of mentor A Jayaprakash and another famous name from Salem, Thangarasu Natarajan.

Jayaprakash, who runs two teams — the tennis ball Chinnappampatti Cricket Club and cricket ball Salem Kings — was instrumental in shaping up Natarajan’s rise. The left-arm pacer, who was picked up for Rs 3 crore by Kings XI Punjab in the 2017 Indian Premier League auction, too had humble beginnings as his father was a daily wage powerloom worker and his mother ran a roadside eatery.

A chance meeting at the village saloon with Jayaprakash became the turning point in Periyasamy’s life. “ I met Jayaprakash sir in a saloon and he came up to me and asked if I was Periyasamy. We knew each other but that was the day when we had a long conversation.

“I am usually too shy to initiate a conversation with anybody. He asked me why I wasn’t playing, I told him I had to take a break of three years because of typhoid. I did not tell my family about my illness because they were already facing a lot of difficulties and I did not want them to struggle because of me,” Periyasamy explained.

“I used to get severe knee aches and I wasn’t able to run properly. I used to get tired very easily. I was going through a hard time,” he added.

“Jayaprakash sir assured me he will be there for me and asked me to just play and work a bit. He took me to the hospital. He used to come and pick me up by 4am and take me to hospital in Coimbatore and drop me back home. It was not his job to do all that, yet he did it. We were strangers. He did not expect anything in return. He wouldn’t even let me thank him. He said it was his duty to take care of me and my duty was to play. He’d say that he does all this because I have the talent. He never got a rupee from me,” Periyasamy said.

“Natarajan has also been a big support. Even the shoes that I’m wearing today belongs to Natarajan. I never got to buy anything for myself,” he added.

Periyasamy got back to playing cricket while still working in the saree weaving firm, but he was plagued with self-doubts and confidence levels were low. Again, Jayaprakash and Natarajan came to his rescue and took them under their wings.

“Natarajan asked me not to be bothered by all that because I had the talent. He wanted me to bowl well. That’s all. But my family was going through a really rough phase. I was not willing to play because of the family situation. I thought If I kept playing, I wouldn’t be able to support them.

“Six months ago, Jayaprakash sir and Natarajan came and talked to my family. They asked my family to give me a period of six months. They promised that they will take care of me and my family wouldn’t have to spend a penny for me. And that is how I came here (in TNPL),” he recalls.

“My day typically begins with a running session. After that I go for practice and after practice, I rest. This has been my routine for the past six months. Before that I used to work and in the remaining time, I played tennis ball cricket. I would play with anyone. Even if kids are playing, I would join them. I just want to play,” he said.

“In spite of having a very difficult situation, my family chose to let me play this year. Earlier, I used to play for myself, now I play for the family. Cricket has given me confidence. Every match is a challenge. People may have a reputation outside the cricket field but when they face me on the ground I want them to know that I am also someone who is talented. I make sure I show that in my performance,” his voice trailed off.

Periyasamy’s journey in 2019 TNPL embodied his fighting spirit and his determination to succeed. Who knows, he could be the next IPL star from Tamil Nadu.

‘He’s precise with his yorkers’

Last season we did struggle with our bowling, we had sides in control but we let go of them in the end. We struggled with finishing off matches, we struggled with death bowling and I think one of the areas that we looked at during the player draft or the focus was primarily looking at a couple of fast bowlers who could give us that bit of a lethal usage right at the top and in the end and we found one in Periyasamy. He’s been a great value addition to our side. A lot of guys might feel that he is someone who has played the lower division and he has not played in the first division but we did have a good look at him and had an eye on him for quite some time. With him getting into the side, it’s become difficult for sides to take off at the top and at the bottom because he gives us wicket taking options. He is pretty precise with his yorkers.

Periyasamy has been outstanding. I am sure he is going to play higher levels too. It’s important for him to keep improving his skills because teams sort out these kind of players very quickly.

Before the start of the season in the press meet I mentioned about Periyasamy as an x-factor for us. He has come out really well for us. It is not easy for someone like him to come and adapt himself to lights, white ball kookaburra which is completely different. I just wish him all the best for his future.

Periyasamy’s preparation before the tournament was outstanding and the credit goes to him.

Periyasamy is from my district and I came to know him only recently. He’s a raw talent and it’s vital how he progresses from this stage. Hopefully he comes out well.