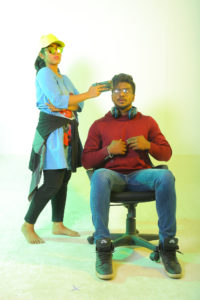 Two college students work as part-time RJs in a FM channel. They manage to create a following for them through their innovative presentations and wacky performances. After their graduation, they become full time RJs and when their life looks cool, it changes for the bad without their knowledge. They realize that internet is equally made of hazards and pitfalls as much as the brighter side. Whether they managed to escape from that harrowing situation and if so, then how forms the plot of this movie.

This movie portrays how the not so significant events in day to day life can alter the course of life in a most entertaining and thrilling manner.

Aravind J is the Cinematographer while debutant Sanathan has scored the music.