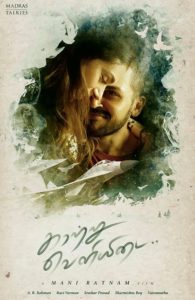 A pleasant surprise was in store for Mani Ratnam fans today, as the ace director unveiled the first look poster of his upcoming film ‘Kaatru Veliyidai’, which has Karthi and Aditi Rao Hydari in lead roles.

The poster had the lead pair sharing an intimate moment, even as birds and flight flying in the backdrop. Remember Karthi is said to be playing a pilot in this flick, tipped as a romantic thriller.

Shooting for ‘Kaatru Veliyidai’ will commence in Nilgiris tomororw and the first schedule will go on for 20 days. Music is by A R Rahman, cinematography is by Ravi Varman, editing by Sreekar Prasad and lyrics by Vairamuthu.

This will be Mani’s new movie after his super hit ‘OK Kanmani’ starring Dulquer Salman and Nithya Menen in the lead roles. It is learnt that plans are on to release ‘Kaatru Veliyidai’ by the beginning of next year. 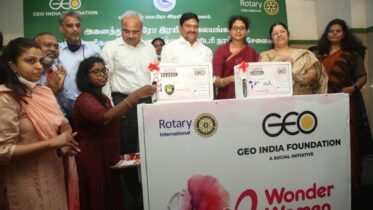 Thiru. M. P.Sampath Hon’ble Minister for Industries, Govt. Of TN inaugurated a facility to dispense Sanitary Napkins for emergency use by women travellers of Chennai…