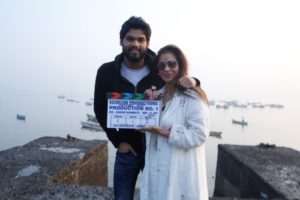 The shooting of Karan Kapadia’s debut film directed by Behzad Khambata flagged off in Mumbai yesterday. The mahurat shot took place in attendance of the cast and crew of the film, including Karan’s aunt Dimple Kapadia who gave the clap for his very first shot.

Dimple and nephew Karan were seen having a long chat with the director Behzad as they both gear up for their debut projects.

Karan has already taken the required training for the film. Karan has learnt to ride a horse and bike, and has been swimming too. He has even got martial arts training for six months in Bangkok.