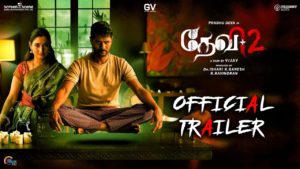 After the super hit horror-comedy Devi, the sequel ‘Devi 2’ is preparing to release worldwide on May 31st and the makers have outed its trailer on YouTube. Prabhu Deva and Tamannaah are starring in the second part as well along with Kovai Sarala, R J Balaji and Nanditha Swetha. L. Vijay who had helmed the first part, has written and directed the movie. The trailer hints that this time there are two ghosts and promises to give viewers double the fun and double the action. It is currently trending on YouTube.

The music and background score is composed by Sam CS. Ayananka Bose has handled the cinematography whereas the editing is done by Anthony. Devi 2 is produced by Dr. Ishari K. Ganesh under the banner of GV Films Limited in association with R. Ravindran of Trident Arts. Muzik247 is the official music partner.