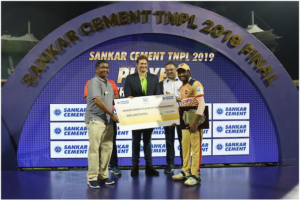 After struggling to post a low score of  126-8 in 20 overs, CSG made a stirring defence of their total to restrict Dindigul Dragons 114-9 in 20 overs. 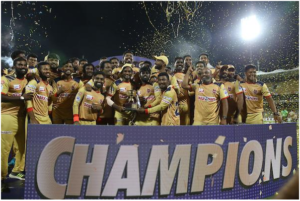 It was the second TNPL title for CSG, who had also won it in 2017, while it was a second defeat in a final for DD in two years.

“It was a phenomenal game. At the halfway stage I had doubts about what I had done at the toss. Periyasamy was outstanding, Sasidev’s contribution was superb too. We had to strike, we didn’t have any other go and everything fell in place,” said a delighted  CSG captain Kaushik Gandhi.

Periyasamy started and finished his spell in spectacular fashion. In his first over, he claimed two wickets to dismiss DD’s best batsman and captain Narayan Jagadeesan and NS Chaturved, without conceding a run. When he marked his run up for the final over, DD needed 15 runs with four wickets remaining. But he snuffed out DD’s hopes by claiming three wickets in the over, for his maiden five-wicket haul in the tournament.

Playing his first season, the 25-year-old ‘Slinger from Salem’ has undoubtedly turned out to be a show stealer, ending up with the most number of wickets, 21. It was also the highest haul in the season by any bowler in four years, with the previous best being 17 wickets by left-arm spinner Ravisrinivasan Sai Kishore for CSG in 2017.

“It was a great experience. The victory was because of my teammates. My mentality is only to win, even when I was playing tennis-ball cricket,” gushed Periyasamy, who was not only adjudged player of the final but also player of the tournament.

If Periyasamy’s first spell was an impressive 2-1-7-2, his second 2-0-8-3 effectively ended any chance of a DD challenge.

Before Periyasamy came in for his second spell, left-arm spinner Ramadoss Alexandar (2-24) had played a part in ending a flourishing DD partnership that was threatening to cut loose. Rajendran Vivek (15 off 11 balls, 2 fours, 2 sixes) and Sumant Jain (46 off 47 balls, 3 fours, 1 six) had raised 38 runs from 25 balls to bring the equation down to 37 from 24 balls.

Alexandar induced an edge off Vivek to keeper Umashankar Sushil off the second ball of the 17th over and in his next over claimed Jain, with the batsman going for the slog and holing out to long-on fielder Senathipathy Harish Kumar.

With Jain, who had anchored the innings beautifully to lift DD from a pathetic situation, and Vivek gone, they suddenly had two new batsmen at the crease. It was a perfect situation for Periyasamy to move in for the kill and he relished preying upon it.

Chasing 127 for a win, DD started disastrously losing three wickets in the first three overs with just four runs on the board. After pacer Vijay Shankar had bowled a maiden first over, Periyasamy bowled a double-wicket maiden to bring CSG right back into the game.

DD captain Narayan Jagadeesan was the first to go, slashing Periyasamy to Murugan Ashwin at point while next man in, NS Chaturved was trapped leg before wicket, two balls later. Vijay also encountered success in his second over when DD’s left-handed opener C Hari Nishaanth (4 off 11 balls) pulled a short ball straight to the only fielder in the deep, Manimaran Siddharth at deep square leg.

At the Powerplay, DD’s score was 19-3, which was the lowest by any team in TNPL, the previous lowest was their own 20-4 against Lyca Kovai Kings this season.

Sumant Jain and leg-spinner Abhinav Mohan (21 off 25 balls, 1 six) stabilised the innings with a fighting alliance of 49 runs from 56 balls. Alexandar once again played a part in ending this partnership plucking a superb low catch at short fine leg to dismiss Abhinav. The batsman had mistimed a pull off a Harish Kumar short ball and it ballooned to where Alexandar was positioned.

Jain, however found another ally in Vivek, who did not waste time in pulling out the big hits. He tonked Harish Kumar for two sixes in the 15th over and then whacked two fours in the next over bowled by Vijay Shankar to bring DD closer to the target.

But Alexandar and Periyasamy had other ideas.

Earlier, Uthirasamy Sasidev propped up CSG after they had lost half the side by the 11th over with just 55 runs on the board. The 26-year-old left-hander’s 33-ball 44 (1 four, 3 sixes) and his 61-run partnership off 48 balls with Murugan Ashwin for the sixth wicket was the only highlight of the innings. The duo was instrumental in helping CSG notch 49 runs in the last five overs.

CSG troubles started in the third over when their top run-getter of the season, K Hari Gopinath was out for a golden duck pulling fast bowler Jagannathan Kaushik straight to deep square leg. By the fifth over, the other opener Ganga Sridhar Raju (4 off 11balls) and star all-rounder Vijay Shankar (1) also joined Gopinath in the dugout.

The left-handed Ganga Raju slashed pacer Rohit Ramalingam straight to Mohan Abhinav at point while a Vijay edge off Kaushik was taken smartly by wicketkeeper Narayan Jagadeesan, one-handed stretching to his right.

Abhinav lured the batsman into a drive in the 9th over and Kaushik ended up holing out to long-off fielder Mohammed Mohammed. In his next over, he had Sushil stumped by Jagadeesan after the batsman stepped out of the crease but failed to connect a drive off a leg-break.

Thereafter, Sasidev carried the fight into the rival camp mixing caution with aggression. He struck a six each off Abhinav and pacers Rohit and Baaskaran Praanesh before getting run out in a mix-up with Ashwin in the 19th over.

Earlier, DD made two changes to the team that won the Qualifier 2 against Siechem Madurai Panthers bringing in pacers Jagannathan Kaushik and Baaskaran Praanesh in place of Adithya Arun and Yazh Arul Mozhi.

Players’ growth and development is highlight of TNPL says Srinivasan

Tamil Nadu Cricket Association president N Srinivasan believes the development of players and their graduation to the national team has been the biggest gains of the TNPL over the four years. “TNPL has done well, grown well. Of course there are more state tournaments of this kind-franchise based league, but, I think TNPL has a march over everybody else. Every year you see players from here going in to the IPL and go on to wear national colours also. I think that is ultimately what we want. We want cricket to develop, we want players to develop and we want to see them in good places, that is happening and I think that’s the satisfaction,” he said on the sidelines of the final here on Thursday.

Fomrer International stars and leading current players – Shane Watson, Russel Arnold, Ambati Rayudu, Kedar Jadhav – who were at the TNPL this season were unanimous in appreciating the superb conduct of the league. Srinivasan credited the TNCA and it’s joint secretary RI Palani for setting the a high standard of organisation.  “I think credit must go to TNCA, in particular I would give credit to R.I. Palani, joint secretary, who has worked tirelessly to make it a success.”

The vice-chairman and managing director of India Cements Limited, who are the title sponsors of TNPL, appreciated the role played by Watson, Rayudu and Jadhav to be ambassadors of TNPL this season. “You see Watson has come all over from Australia. I think the interest that they have created, and time that they’ve put in to watch the game and comment on it augurs very well for Tamil Nadu cricket. I think they wanted MS Dhoni to come this year but since the final coincided with Independence Day, he’s not here. But, hopefully next year he will be here,” he said.

The former Board of Control for India president indicated that the TNPL is expected to grow further by spreading to new venues like Coimbatore. “We’ve Coimbatore in mind. So, hopefully next year we’ll have one more venue,” he said.

The Tamil Nadu Cricket Association thanks all its Partners of the Fourth Edition of TNPL:

The Tamil Nadu Cricket Association thanks their Groundsmen for providing excellent wickets for all the matches despite the tough weather conditions.

The Tamil Nadu Cricket Association also extends its gratitude to the Corporation, Police Department, Electricity Department, Public Works Department, Fire Department, and all other government organizations and all those who were involved in the smooth conduct of the Sankar Cement TNPL matches.