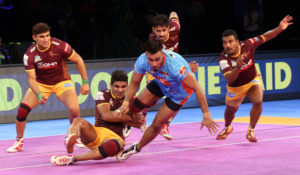 Bengal Warriors beat a formidable UP Yoddha 40-20 in an interesting clash at Nagpur today, for the second win in the VIVO Pro Kabaddi League season Five here today.

Vinod Kumar lead the way for the Warriors with eight points while Jang Kun Lee with seven and Maninder Singh with six were the other prominent scorers.

For the Yoddhas, Surender Singh was the highest scorer with five points while star player Rajesh Narwal got three.

Bengal’s all-round supremacy won the day for them against the UP team, which had yesterday, outclassed U Mumba in some style.

Bengal Warriors were on the attack from the word go against a formidable rival, who had been unbeaten till date.

After falling behind by a big margin at the end of the first half, Yoddhas mounted a fightback in the second with Narwal doing some good work.

Despite the good work by Surender and Narwal, the margin proved too huge for Yoddhas to close in on. Also, the Warriors made sure that they didn’t get complacent and held firm for a creditable victory.

Maninder Singh was one of the stars for the Warriors as the team took a stranglehold of proceedings, even as the Yodhas were left wondering what hit them.

In the first half, Maninder was the star for Warriors with several raid points as they secured an impressive 22-8 lead at the break.

The Warriors had 12 raid points to five for the Yoddhas and also had four tackle points to boot.