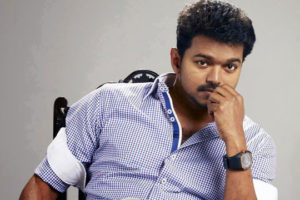 Ace director S S Rajamouli’s father K V Vijayendra Prasad, the man behind the scripts of ‘Naan Ee’ and ‘Baahubali’, is said to be penning the 61st film of Vijay.

The movie, which is untitled yet, will be helmed by Atlee who directed ‘Theri’with Vijay earlier this year. And it will have Kajal Aggarwal as the heroine, according to sources.

Vijay and Kajal are already a hit pair, thanks to ‘Thupakki’ and ‘Jilla’. “This 61st movie of Vijay will be an action packed entertainer with so many twists and turns,” added sources.

In the meantime, buzz is that the 62nd film of Vijay will be directed by Selvaraghavan and produced by Dhanush’s Wunderbar Films. But nothing is official about both the 61st and 62nd movies of the ‘Ilaya Thalapathi’. The only sure thing so far is his 60th flick ‘Bhairavaa’ is fast taking shape.

Infiniti Film Ventures produce this film that is written and directed by “METRO” fame Ananda Krishnan. Like the title the film has all the trappings…