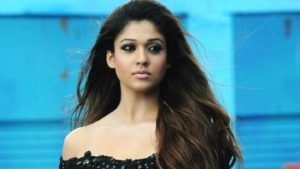 The team of Vikram-starrer ’10 Endrathukulla’ is planning to promote the movie in a big way. But it is skpetical about one thing- having the film’s heroine Nayanthara on stage for promotion events.

For, the actress is known for staying away from such activities. “But attempts will be made to make her attend the promotions, at least in her hometown Kerala,” sources said.

Written and directed by Anand Shankar of ‘Arima Nambi’ fame, ‘Iru Mugan’ has Vikram, Nayanthara, and Nithya Menen in the lead roles. Harris Jayaraj is the music composer, while R D Rajasekhar is the cinematographer.

Audio of the movie is expected to be released recently and Harris is said to have come up with five beautiful songs. Produced by Shibu Thameens, ‘Iru Mugan’ is tipped to be a science fiction thriller. Plans are on to release it by September or October.