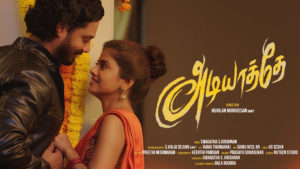 Music becomes complete with splendiferous lyrics and honeyed vocals. Very rarely do such resplendent songs arrest our senses and playback singer Swagatha significantly beautified our music listening experience with each song. She has never missed to be a showstopper irrespective of any musical genre that is offered to render her vocals that includes ‘Dirty Pondatti’ from Kaatrin Mozhi ‘Aala Aala’ from Lakshmi and many such numbers.

Now, she has explored a new arena as a music director by composing music for a song titled Adiyathe . While her voice and music had captivated the attention of listeners, her screen presence in the video that is released on YouTube has made the song much more beautified. Especially, the league of listeners from the Youth groups has maximized for this song. With Mugilan Murugesan offering a beautiful touch to the visuals with his directorial skills, the song that starts with the lines ‘As the twilight and dusk embraces, my heart goes deep into thoughts of my beloved’ and the mesmerizing vocals of Swagatha has captured the towns now.