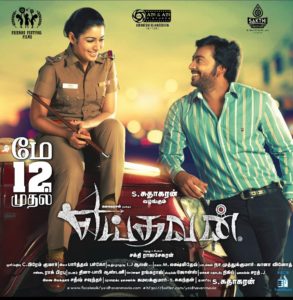 Sakthi Rajashekaran is the debutant director of this film that has a lot of debutants playing varied roles in the movie.

The story of Yeidhavan can remind you of “Gentleman” albeit the treatment is a lot different here and the execution too. The story starts of interestingly and slowly it gets involved into social issues and the main focus “Medical Education”, with the time ripe in the prevailing situation the script rather dissolves tamely like a conventional masala film. The movie showed a lot of promise and the narration too has its moments but sadly it fails to sustain the momentum.

Kalairasan as the hero fits the bill as a common man but his dialogue delivery is found wanting at most places. Satna Titus is the heroine of the film and has very little to do despite playing the police officer. Sad to see despite the heroine being a police officer she plays second fiddle to the hero. It is Gowtham as the villain who walks away with the honour with his swagger and looks. He looks a very good potential. The others play their parts well.

Cinematography by Prem kumar is apt while Paarav Baargo fumbles with his inept music score. The dialogues are OK while the editing could have been tighter. Direction by Sakthi is decent.

Yeidhavan could have been a lot better than what it has turned out to be. Intention and concept were in the right place but somewhere it got lost in translation.