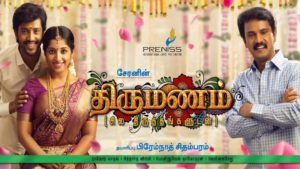 THIRUMANAM is Cheran’s directorial venture that is produced by Preniss International that has Umapathy son of Thambi Ramaiah in the lead role.

The story is as you would expect of a Cheran movie. A story with a strong message that is preachy at regular intervals. The “mega serial” like presentation can be tough to adjust with a predictable screenplay. The so called lead pair has little to do while the support cast has everything to do in the film. Though less on melodrama, the film is plain and bland as it attempts to score on family sentiments and traditional values.

Umapathy is just average in this light weight role. Kavya Suresh is a better dancer than an actress. Cheran is as stiff as you always have seen. Sukanya does not impress much. It is Thambi Ramaiah and Bhaskar who are convincing in their elderly roles.

Rajesh Yadav behind the camera keeps the proceedings very sober. Sidharth Vipin’s music sounds muddled while his background score is ordinary. Editing by Ponnuvel is OK. Dialogues are typical while direction by Cheran is standard.

THIRUMANAM has the right idea but suffers from a lack of interesting screenplay but yet it might find takers for its honest intention and message.