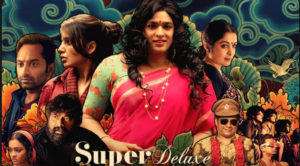 Thiagarajan Kumararaja etched his name in the hall of fame of Indian cinema with his brilliantly written “Aranya Kandam”. Scores of avid film goers from all over have waited more than 8 years for this maverick film maker to make another film and when the news of “Super Deluxe” arrived they were more than overjoyed. Super Deluxe is Tyler and Kino Fist’s production.

Multiple stories, multi layered at multi levels, overlapping at multiple intervals and yet not cliché like layered movies usually are, that is the uniqueness of SD. It could be the indulgence of the writers to conceive a screenplay that stretches and at times test your patience and yet coax the viewer into their bubble and keep them afloat. There are few moments that can easily be a yawn but the yarn is held so tight with meticulous details that you can afford to lose the bigger picture and enjoy the minor details. Every frame has something of interest that enthuse the viewer. There are references galore in the background for the keen eyed or the musically inclined that they can soak in. SD is smart in its writing with its totally nonchalant ways in taking up societal issues in a not so preachy way but at the same time in letting the viewer decide the ethos of it. The grey areas needs grey matter to be understood especially the wry humour in the most uncongenial situations.

Vijay Sethupathi is the supposed star of the film, it is a little refreshing to see VS shed his blasé act and perform vulnerably as the character demands. Fahad Faasil is as good as he always is. Ramya Krishnan is all poise, while Mysskin showcases his theatrics on screen convincingly. Despite all the above veterans it is Samantha who takes the cake in a remarkable performance that grows on you slowly start to finish. The teenagers as well deliver their most with their poker-faced expressions that amuse the viewers.

PS Vinod and Nirav shah share the credits behind the camera and they transform the viewer as a character in the film. Intense visuals and intriguing frames keep the viewer visually glued. Yuvan helped ably assisted by IR and Bappi Lahiri scores works well with intelligent pauses and grandiose when necessary. The art is a little made up to feel good. Sathyaraj Natarajan’s editing isn’t taut but gambles with the director’s vision. Dialogues are very good while in direction Thiagarajan manages to keep his reputation intact.

Super Deluxe is definitely not without its bumps, but then they ride over them with less discomfort. SD’s writing is not as sharp or deep as AK and yes there are moments where it is long drawn and also with a silly villain for no purpose.

SUPER DELUXE is not the regular transport that movie goers usually would like to travel, for connoisseurs of cinema it would be a lot to dissect and devour, and for some it would be too much a stretch.