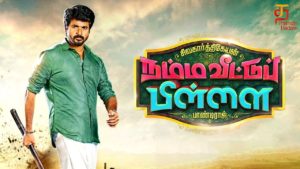 Sun Pictures produces this film that is written and directed by Pandiraj. Pandiraj had a big hit in “Kadaikutty Singham” prior to this.

When something works for you why change? This seems to be the mantra for Pandiraj and he faithfully sticks to the formula of his previous film and just tweaks it a bit here and there to deliver something not as convincing as his earlier film. The first half meanders around aimlessly with so many characters that are lazily written and scattered that it takes a while to come around them. With the melodrama and the skirmishes already defined the script does not allow the viewer to invest emotions in it. It is only in the second half that the movie decides to gain some steam and that is done through the director’s trademark “melodrama” that comes in twists and turns and with a lot of tear jerking moments. The romance between the lead pair looks as forced as a “Selfie smile”.

Siva Karthikeyan is Okayish in a role that is soft and more on emotions. Anu Emanuel does not impress. Aishwarya Rajesh breezes through her role. Samudrakanni looks jaded. Natraj and Bharatiraja do well. Soori doesn’t over do. Yogi babu is wasted. The supporting cast are good.

Nirav Shah makes the visuals look better than they actually are. Imman’s heavy background score amplifies the melodrama. Save for one the rest of the songs are below average. Ruben’s editing is inconsistent. Dialogues are average and direction by Pandiraj could have been better.

NAMMA VEETU PILLAI is not everyone’s ticket for a movie, but for the ones who like drama, drama and dramaaaaaaaaaa….