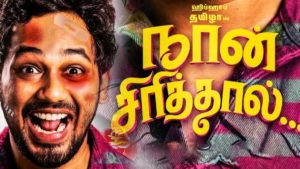 Sundar C produces this film that is written and directed by Raana.

Horror-coms have been literally done to death and now Kollywood is busy researching “exclusive health disorders” to bring in new laughs and suspense. Engineering, IT, Friendship, Tamil are all tools that are used to mock or propagate in such films and here we do have such references that make no sense to the storyline. The comedy does not work and is mostly ridiculous. There is nothing called a story here and the less said about the mess, the better.

Hip Hop Tamizha looks jaded and out of sorts and is sadly repetitive. Ishwarya Menon has little to do and does little good. KS Ravikumar prances around in a caricature role. A lot of supporting actors make up the crowd but without substance.

Cinematography by Vanchinathan is ineffective. Hip Hop Tamizha’s background score is too loud and jarring. The songs don’t make an impact as well. Dialogues are average and sometimes dumb. There is not enough material for the editor Sreejith to work on. Direction by Raana is below average.

NAAN SIRITHAL is one wasted effort that communicates nothing nor does it tickle any bones..