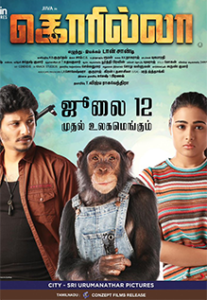 GORRILLA is produced by Vijay Raghavendra and is written and directed by Don Sandy. The movie garnered interest due to the gorilla cast in the movie.

OK, you are warned not to look for logic in the film, but in overlooking commonsense and executing a shoddy screenplay the makers of this film have taken the audience for granted. Don’t get lured into believing it is a “bank heist” film, but what in turn you see is a gang that goes about flaunting cringe worthy jokes and wretched humour because of which the “Exit” signs look bigger than the screen. Even the attempt to be inspired by Hollywood films and taking the “message” route backfires because of the silliness in its writing and the horrendous storyline.

Jiiva, despite all the talent seems to be wasting all of it in “wasted” films as these. Shalini Pandey is barely average in her nonexistent role. Yogi Babu tries to save face with some blurred comedy.

It is the background team of Gorilla that manages to make the onscreen nonsense somewhat bearable. Gurudev’s cinematography is good while Sam’s decent musical output is wasted in this film. Editing by Ruben is average. Dialogues are miserable and direction by Don Sandy ordinary.

GORILLA would surely compete to be the best among the worst films of 2019.