The film begins languidly trying to establish characters and in developing the plot. Despite having a tight plot the debutant writer’s inexperience comes to the forefront in being very informal towards approaching the subject. The characters in the film even with spending enough time on them come out rather unpersuasive. There are a few contradictions too in establishing these characters and their relationships. The climax is another jolt that is rather funny after all the toil.

Lal, a veteran from Malayalam cinema is underutilized in a stiff role. Natty tries to do his bit in a weakly written part. Ananya does what is expected out of her. Ashwanth is fine and so is Marimuthu.

Shanmuga as the DOP is just about average. Navin scores decent in the background while the songs are a major impediment in films such as these. Dialogues are okay. Editing by Bhuvan is inconsistent and jumpy. Direction borders on being naïve.

GODFATHER, well the title is a wonder, and is just about an average watch only for its premise. 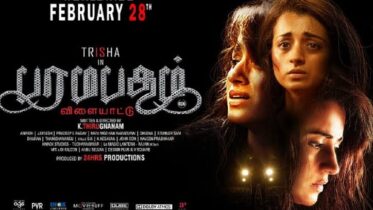 Produced by 24HOURS Productions PARAMAPADHAM is written and directed by Thirugnanam. The film was supposed to have a theatre release in February and various factors…