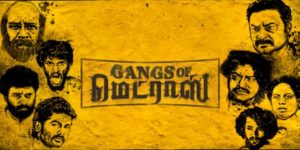 GOM is produced, written and directed by CV Kumar. A crime thriller, a gangster film, GOM evinced good interest among movie goers with its decent trailer.

It takes only a few minutes to read the sloppy attempt to make a gangster film. A few more minutes you do know where this is heading and you feel oblivious to the proceedings on the screen. The screenplay is so tardy that only the characters on the screen seem to take the film any seriously. OK, there are a few good decent attempts in the movie, this has a woman don (though unconvincing) and GOM is not set in the cliché north Madras. The inconsistencies hamper the already dull proceedings. The melodrama wears the viewer out and the lack of intensity just kills the mood.

Priyanka Ruth has put in a lot of hard work and yet… Velu Prabhakaran passes off as don while the rest are just caricatures including Daniel Balaji.

Karthik uses the red, green and yellow the supposedly gangster movie colours to bring in a deadly feel on screen. Shayamangalam’s BG score is average. Dialogues are weak, editing by Dhanpal lacks finesse while direction by CV Kumar is amateurish.

GANGS OF MADRAS, is a grand title but a juvenile attempt and is a revenge saga that is devoid of gangs and gangsters.