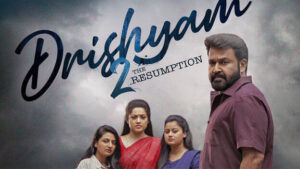 DRISHYAM 2 is a sequel to the gripping prequel that set the cash registers ringing across the country in the languages it got remade. The sequel is an attempt to build on a few loose ends from the first part. DRISHYAM 2 is produced by Aashirwad Cinemas.

D2 begins rather very leisurely in an effort for the audience to connect with the family after a long interval. This takes almost an hour with a few “peppering” here and there to build the suspense. The writing is largely subdued compared to the original and the ingenuity of the first part is missing. A few twists are smart and a few pale compared to the first part, while some scenes are contrived. Yet what works for the film ironically, is the familiarity and our rooting for the family.

Mohanlal is immaculate as only he can be. Despite being remade in many languages, Mohanlal returns as Georgekutty once again to prove why he is the most indomitable actor that he is. Meena looks jaded. Ansiba and Esther look out of sorts. Murali Gopy is good and the rest of the supporting cast are decent.

Satheesh Kurup’s cinematography works fine. Anil Johnson’s music continues from where he left. Dialogues are good. Vinayak could have been a tad sharper in editing. Jeethu Joseph does not surprise in the direction department.

The good and bad about D2 is its familiarity and predictable outcome. With the “surprise” element missing, the film banks on our undisputed loyalty to the “family” and its headman Mohanlal. 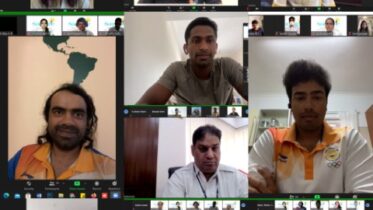 The Indian Olympic players selected to participate in the Tokyo Olympics, are set to fly to Tokyo on the 14th of July 2021