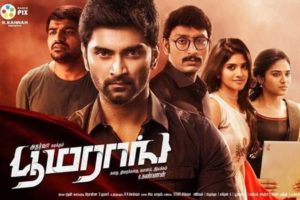 R.Kannan produces this film that is written and directed by him. Atharva plays the lead role that has Bollywood import Upen Patel playing an important role.

The film has a lazy beginning before it starts off to establish itself. Though the principle of the film is interesting it takes quite some time to be taken seriously. You have a lot of scenes telling the viewer how “beautiful” Atharva looks, and sincerely more beautiful than Megha. The first half and the second half are two different movies altogether. The second half is set in the usual Tamil film template. Tamil film villains are different these days. They are NEET, GST,Corporate,Government and so on. Though the film does take up an important issue but then it fails to handle it well with some very ordinary screenplay.

Atharva is confident and earnest but there is something more that he can bring to the screen than his so called “Greek god looks”. Megha Akash has little to do with the hero being pampered as the “Beautiful” one. Indujha has a more serious role while Upen Patel comes late and fails to impress. RJ Balaji isnt different. Oh yes you have Sathish with his annoying one liners and typical body language.

Prasanna Kumar delivers decent frames on screen. Radhan’s back ground score is average while songs are decent. Editing by Selva is adequate and dialogues just about reasonable. Direction by Kannan could have been better.

BOOMERANG, ironically should have taken the cliché route considering its interesting premise but then tries to be different and that boomerangs.