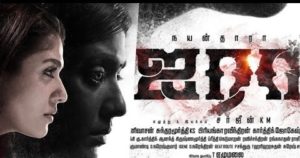 Nayanthara is the toast of Kollywood so much that she can hold her own against the male stars. Airaa also happens to have 5 am shows too. KJR studios produce this film that is written by Priyanka and directed by Sarjun.

AIRAA focuses itself on the “butterfly effect” which simply translates to “a small change can lead to large changes”. Airaa is difficult to categorize, it starts of as a routine boring horror film and then shifts gears in the second half where it starts to make sense. There are many messages that keep surfacing and that could be the issue as well. The writer takes too many things on hand to deliver and they lack strength and deeper purpose. The suspense too is carelessly handled and the reason for everything downs everything else that we have witnessed so far in the film.

Nayanthara, gets boring and repetitive with her expressions, is it really enough to just be present on screen?. Yogi Babu, despite all the hype fails with his tardy one-liners. Kalairasan is good in his role while Mathevan and Gabriella deliver decent performance.

AIRAA scores better technically. Sudarshan’s cinematography gives the scenes the edge despite ordinary moments. Sundaramurthy’s background score too works well in dalliance with the cinematography. Editing by Karthik Jogesh attempts to confuse. Dialogues are decent while direction by Sarjun is middling.

AIRAA gets lost in its effort to be smart and confusing on purpose.