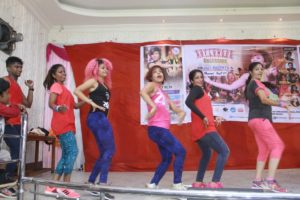 Zumba® fitness organized an exclusive BOLLYWOOD OBSESSION with ZES SUCHETA PAL in Chennai on 25th September 2016. It was an exclusive fitness event with the Brand Ambassador, MS. SUCHETA PAL and along with her, the International Licensed Zumba® instructors certified under the Master Trainer were the hosts of this event.Around 107 People from Chennai participated in this event. They also felicitated the winners from the Radio One Contest.

ZES Sucheta Pal is a Celebrity Fitness Trainer and a Master Trainer for Zumba® International. She has trained more than 2500 instructors across India and South East India within the short span of 3 years. She has been chosen as the “100th Young Indian Women Achievers 2016” by Popular Choice and Industry. She is the ambassador of “Fit India” Campaign which was launched by the Union Minister for Health and Fitness Welfare.

She was honored with Pioneer Award Winner from Zumba® Fitness consecutively for two years (2013 & 2014). She has also been featured as the “Fitness Expert” by Premium Media Channels like NDTV Good Times, TLC & Channel V. She has also got an exclusive TV series on Zoom TV for two seasons Premiered as “Zumba® Dance Fitness Party led by Sucheta Pal”. She is also part of the other Celebrity Fitness Programs like Piloxing®, Masala Bhangra Workout® Ambassador, Pound®, Insanity®, and holds International Nutrition Certifications by SCW® and Glanbia®.